How can you not beat yourself up too much when you do things that make you feel like you’re a bad mom?

How does the guilt go away?

My daughter is only 3 months old but whenever I do something I consider lacking or something that accidentally hurts her, I just want to cry out of frustration.

My husband laughs at me and asks me how would I feel when she is older and hurt herself, scrape her knee, or experience a broken heart?  I would cry.  Probably louder than she would.

But really, how do Moms stay upbeat during situations that make you want to beat yourself up?

Working keeps mind off the guilt, I suppose.

Playing with the baby, coaxing her to smile, tickling her feet.  Maybe they’d help you smile too and forget.

Until the next time it happens again.

What people didn’t put a lot of emphasis on when I was pregnant amidst all the advice I was given is this “I am such a bad mom. I wanna beat myself up.” feeling.  It is real and it sucks big time.

It helps to have a supportive partner who’d hug you, rub your back, and tell you things are going to be all right after you’ve done the same thing to your kid.

But really, help me out.  How can I be upbeat after beating myself up?

Nowadays, people are obsessed about being fair in all their dealings.  I am not saying it is not right because it is.  The question that bothers me is that, in this day and age, is being fair enough?

When I first joined our business, I was astounded at the salary given to our employees.  They were way more than the minimum wage.  Coming from the corporate world where everyone is asked to look for ways to save money for the company, I told my father that we can lower down the salary into the required minimum wage based on our city law and get bigger profit.  It is still fair, right?  But he vetoed me.  He said that these people deserve what they were getting.  My father was not just being fair, he was also being generous.  Until now, our business’ biggest expense is our employees but they also are part of the business’ success so I am no longer complaining.  In fact, I appreciate the lesson that was given to me.  Being fair is good.  But being generous, is a lot better.

We had misfortunes of having our cars “carnapped”, too.  Carnap is a term used in the Philippines for stealing vehicles.  One person rented a car and actually brought it to Mindanao without the intention of returning it.  The Highway Patrol Group were able to recover the car and my father had to fly to Mindanao to identify the car and to bring the people who stole the car back to our city so he can file charges.  It was a long trip via land and sea to bring the car from Mindanao back to our city and during that time, the women who were inside the vehicle already smelled and were uncomfortable because they did not have change of clothes. Being fair would have been my father just letting them suffer for what they did.  But gracious man that he is, he actually bought them clothes.  Yes, the same women who stole his car.

I have hundreds of stories like these so you know that I grew up with very generous parents.  They were not rich but they always give more than what is fair.

My generosity has always been questioned.  People ask, why do you like giving gifts to others when they don’t even give gifts to you?  My answer is always:  Why not?  Giving gifts to others makes ME happy.  I know it makes them happy too but it makes ME happier so in a way I am doing it for myself and not for them to return the favor.  Being fair would mean giving others the same amount of gift they give to me.  But being gracious means not caring what I receive but caring more about what I give.

You will not touch people’s lives by being fair.  You will touch lives and inspire others, however, by being gracious, by being compassionate, by being generous.

And what good life is if you don’t inspire others or you don’t make them happy?  What kind of life is that?  And who would want to live a life like that?

The easiest way to make people happy and make yourself happy in return is to always, always give them more than what you think they deserve.  Regardless of the situation.

Then I promise you, the world will just find ways to reward you.

My baby’s 11th birthday is coming up and we decided to give her a swimming party with an Emoji theme.

As I will not be there, I volunteered to make the invitation.

I love making invitations from scratch.  Not only is it cheaper, it is more personal and they are fun to make, too!

I started by designing the main invite and printing them out. 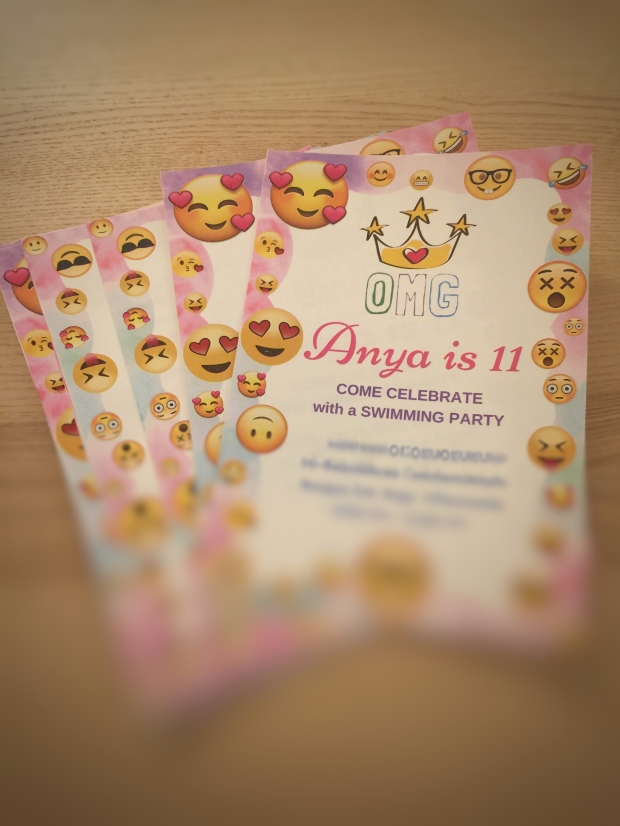 The next step was to prepare the “envelopes” or the cover.  In this case, they are just folded colorful stock cards.

I wanted the envelopes/cover to be less serious so I had to cut waves on the top and bottom.  I used regular scissors but it would have been a lot better if I have pattern scissors.

I then glued the main invitation to the colorful cover. 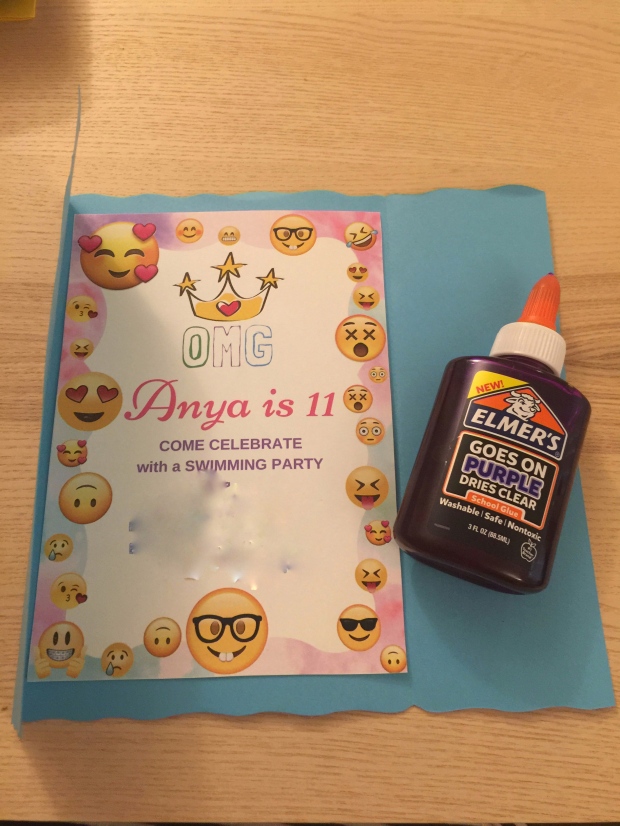 Of course, I blurred all the details in this photo for security purposes.

I then printed out emojis that I cut out.  I think this is the hardest part of all.  Cutting out the emojis took at least 30 minutes of my time. 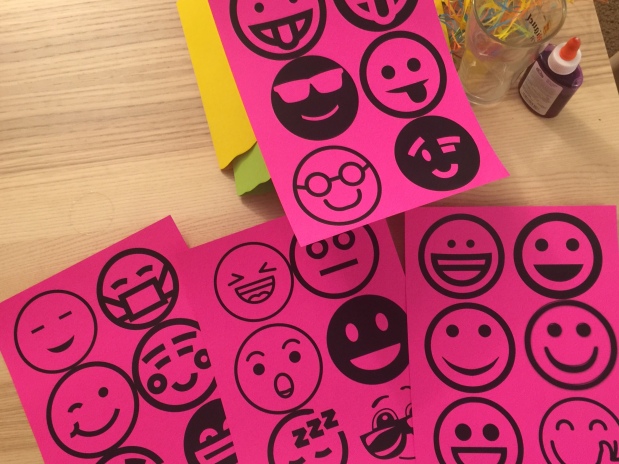 Lastly, I glued the emojis to the invitation. 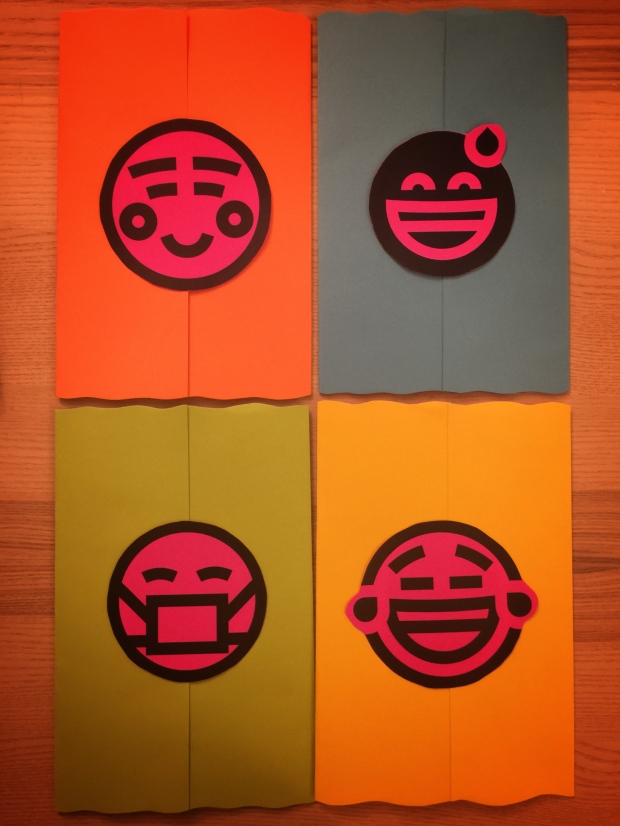 I spent around 3 hours doing all the 24 invitations.

You know how in love I am with my Instant Pot, right?  It makes cooking lentils a lot easier for me because I get scared with the simple pressure cooker pot.  My imagination always makes me think that it will blow up and blow me up too in the process.

Dal, or dishes made of lentils, are the easiest to cook for Indians, I think.  They eat this almost every day.

I tried my luck in cooking this and made Masoor Dal which is brown lentils.  I followed this recipe from And Then She Said blog because I found it the easiest.

How did it turn out?

I think it turned out very good.  I am still waiting for the verdict of my taste-tester who I am sure would tell me that I should have added more salt (but I hate salty food!).

The only thing I did differently is that I pressure cooked the dal for 5 more minutes because the 18 minutes the blogger wrote in the instruction was not enough to make all the grains soft. 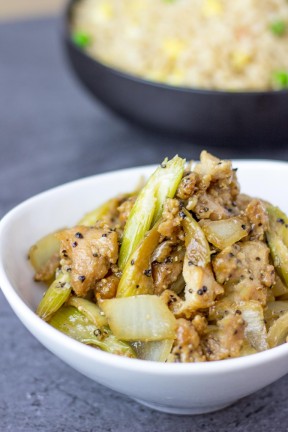 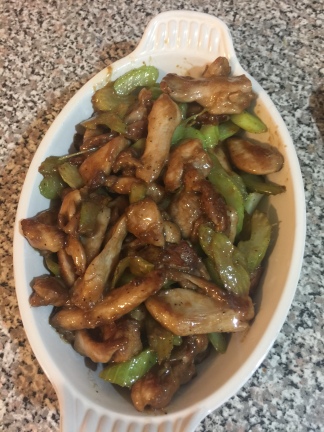 This is what my Pepper Chicken look like. It’s darker because of the dark soy sauce I used.

I am not ashamed to admit that I like fast food and I crave them all the time.  You just don’t know what I would give to eat Jollibee spaghetti, chicken joy, palabok, and tuna pie now.

We watched Mamma Mia and I had to stop myself from singing along with the songs.  By doing that, I used up all my energy so I needed food.  When I am hungry, the easiest way to make me happy is to give me rice.  So we went to Panda Express.  It has been years since I last ate from Panda Express because I don’t usually go to malls but I still think their food is good.

So I tried to make their version of Pepper Chicken.

This is the recipe I followed.

That site has a lot of recipes that follow Panda Express’ menu.  I will try to make Orange Chicken next.

So here are the changes I made:

Although what I cooked was nowhere near what Panda Express’ Pepper Chicken taste like, I still think it turned out good.  The chicken was tender and the taste was good.  Of course, this dish is best served with rice.

All pictures are owned by me. Do not use without permission. All stories in this blog are purely products of my imagination. Any similarity to real situations is purely coincidental.